The voice of the turtle, the green figs, and the Blessed Virgin again

In my September 1 post "I'm being shadowed by a red turtle dove," I wrote about being followed by a bird of that description (which, by the way, has not reappeared since I wrote that post). Connecting it with the red dove that appears on the Rider-Waite Magician card, which I had interpreted as a symbol of prayer, I took it as an injunction to pray more -- in particular, to be stricter with myself about praying the Rosary every single day. In my original post about the red dove on Waite's card, I had quoted Waite's reference to "flos campi and lilium convallium" -- which I encountered again when I looked up "the voice of the turtle" in the Bible and found that it was in Song of Solomon 2:12, and that that chapter begins "I am the rose of Sharon, and the lily of the valleys." I noted in my post that I had thought "Rose of Sharon" and "Lily of the Valleys" were Marian titles used in the Litany of the Blessed Virgin, but that in fact they are not. I also noted the reference in v. 13 to "green figs," synching with my own recent experience with green figs.
Today, on a whim, I started reading La mère de Dieu (1844), an early devotional work written by the then-obscure Alphonse Louis Constant six years before he took up magic and began to be known as Éliphas Lévi. Beginning on p. 52, Lévi describes an imaginative scene in which the young Mary, only three years of age, feels drawn to the Temple, enters it, and receives a revelation of her destiny as the future Mother of God. In describing her rapture, and her spiritual communication with the unborn Christ, Lévi draws heavily on the language of the Song of Solomon. On p. 57, I found this: 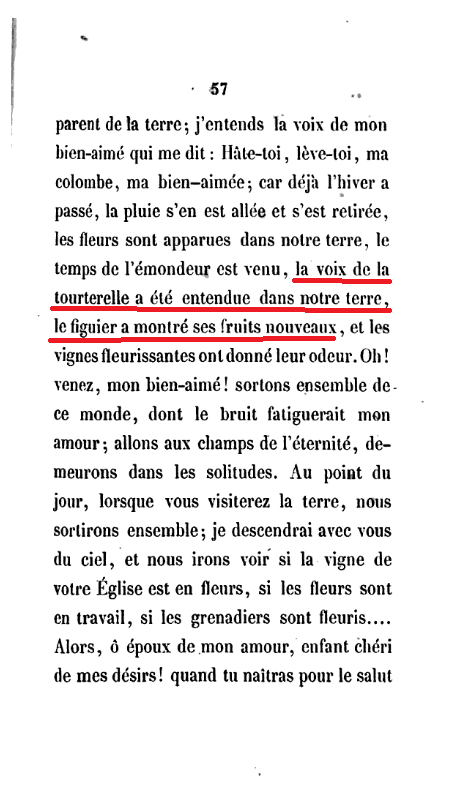 This is a very close paraphrase of Song 2:12-13 -- a passage which I had connected with praying to Mary, but only very indirectly, by way of an obscure detail on a Tarot card and an incorrect memory of the content of the Litany of the Blessed Virgin. Here is Lévi connecting the same passage with Mary very directly.
at September 23, 2022

Email ThisBlogThis!Share to TwitterShare to FacebookShare to Pinterest
Labels: Doves, Éliphas Lévi, Figs, Mary, The highway is for gamblers

I think Epicurus liked to eat green figs, or was that a different philosopher?

Zeno of Citium, the founder of Stoicism.