This morning I taught an English grammar lesson to an adult student, about the use of can, could, and be able to. The exercises in the textbook included these sentences:

These days any reference to Michael gets my attention, as that archangel has been in the sync stream a great deal. Seeing the name Catherine just two lines later made me think of St. Catherine and reminded me that Michael, Margaret, and Catherine were the three saints who appeared in vision to Joan the Maid.
In fact, I had already been primed to think of Catherine as a saint because of something I had read yesterday evening, while teaching a different unit from the same book to different students. The unit was about the correct use of the (which is much more complicated than most native speakers realize!), and the point was being made that the definite article is not used with people's titles -- that, for example, we say "the sergeant" but not "the Sergeant Pepper." The following examples were given:

This got my attention even at the time because, although I suppose most people have heard of St. Catherine, hers hardly seems like the first name that would come to mind if you just wanted a random example of "Saint so-and-so."
Anyway, returning to "Ask Catherine about your problem," an exercise on the next page had the question, "When should I call Angela?" with a prompt intended to elicit the answer, "You could call her now." Angela, a female angel, was close enough to the female saint I had just been thinking about, that it made me think I was perhaps being nudged to pray to St. Catherine.
Angela also made me think of my recent dream, in which a Spanish girl had said "No me llamo Marcela. Me llamo Gabriela." -- Angela and Gabriela being conceptually similar names. After the class, on a whim, I Googled marcela gabriela to see if the two names had any special connection, but I just got random people's social media pages. Then I Googled the whole Spanish quotation. This turned up a children's book called Me Llamo Gabriela, about the Chilean poet Gabriela Mistral. I looked her up on Wikipedia but found nothing of interest. I did note, though, that Gabriela Mistral was a pseudonym, and that her real name was Lucila de María del Perpetuo Socorro Godoy Alcayaga. It struck me as typically Spanish that her name included not just María but the full title María del Perpetuo Socorro.
I then turned to looking for prayers to St. Catherine, and what kept coming up was the St. Catherine of Alexandria Novena. Never having been Catholic, I had only the vaguest idea of what a novena is, so my next stop was the Wikipedia article for "Novena." The illustration at the beginning caught my eye. 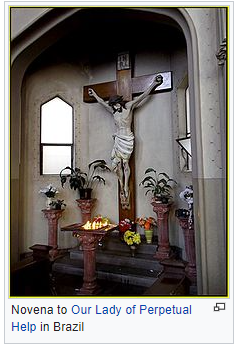 Isn't it obvious that Our Lady of Perpetual Help is identical to María del Perpetuo Socorro?
at September 15, 2022

Email ThisBlogThis!Share to TwitterShare to FacebookShare to Pinterest
Labels: Michael the Archangel, Prayer, Saint Catherine, The highway is for gamblers

Glad to see you 'back' posting ;-)
Perhaps the sync Faires wishes you to remain?


I personally believe that if we're given a puzzle piece
it's our responsibility to pass it on to others, who may need that exact puzzle piece
for whatever reason and/or for whenever time.

I believe that sometimes ' messages/ideas/inventions/perspectives' given to us, aren't necessarily meant for us, but perhaps for a much bigger picture.

Case in point:
My best friend and I were discussing a few things and the subject of the sign of Pisces came up in the conversation, sparked by my comment about being me being a Pisces may explain the way I react to certain situations.

My friend brought up the fact that several close members of her family were Pisces, and they didn't respond to situations as I do, which of course, and as I responded, that although under the same deep Sea (See ), not all Fish are the same.

I shared with her my belief that a myriad of factors plays into who we are and become throughout the years, and I'm not suggesting that any one ideology/theory/ belief can explain everything about each individual, because I personally believe that it absolutely can not.

My friend and I have actually discussed this particular subject about Decans many years before which I had sent her the same blog link many years ago.

What was odd is that when I clicked on the blog yesterday, I saw something which caught my eye, which I don't recall reading about or seeing previously, which of course was many years ago.

The only reason that particular information caught my eye, was because of your previous posting about the Tarot Card Eight of Cups.

The article is about something called First Decan Pisces, which I am one (Feb 19) .
My birthdate is actually on the cusp with Aquarius.

Although I'm not saying that all people born in any particular Zodiac sign or Decan are the same, which of course that would be ludicrous to believe, but I must admit much of this authors interpretation of the First Decan Pisces fits me like a glove.

Everything is Connected, no?


I do wish to add a caveat here which I've mentioned before which is this:

I personally do NOT believe in Anybody's Everything and that includes the esoteric.
I obviously am not an Astrologer, nor am I deeply well versed on the subject, although I think I can hold a conversation on the subject, at least with the objective of learning more.

I have found many puzzle pieces from a vast spectrum of ideologies, which each puzzle piece is usually sparked by a dream or esoteric experience/synchronicity event, which I believe me finding this information about the Tarot Eight of Cups card and the First Decan Pisces was a synchronicity event.
Especially given the consideration that the Eight of Cups 'message' is actually what I've been experiencing in my personal life lately. ( see second link below )

There is also a mention of the Siren in the First Decan Pisces article as well, and I found that interesting given previous comments on your blog about the Starbucks cup and the siren.

That's why I had to hedge by saying I would "little or nothing" -- because I'm always on call when it comes to synchronicity.

Your mention of decans was helpful. Looking up what Ptolemy had to say about them, I understand the Tarot/astrology correspondences of the Golden Dawn a bit better than I had before.

I was thinking yesterday about something. I read that Joan is supposed to have physically interacted with Michael, embracing him or something like that. That might make sense for Margaret or Catherine, being resurrected men in Heaven that must have either teleported or somehow created an image of themselves in this world, but for Michael? I wonder how spirits might temporarily incarnate. Assuming Michael hadn't passed through incarnation in this world, having been born to men, and then resurrected into Heaven.

I suppose the fact that I recently posted a song about archangels by Catherine “Kate” Bush is also relevant.

y'know there are two St Catherines

That's true, but I assume the one to whom my attention is being drawn is the one who appeared to Joan, and that's generally agreed to be Catherine of Alexandria, of "Catherine wheel" fame.

It's just that Catherine of Siena has a more Michaelic feel to me, as does Joan

Catherine of Siena also died at the interesting age of 33

I also just found this very interesting blog about the First Decan Pisces
and its very intriguing connection with the Tarot Eight of Cups.

While re-reading the article about the First Decan Pisces, that I just found,
and just posted my comment to you, Lo and Behold in the article I found reference to Fortune's Wheelhouse!!

Copy and Paste from article; ( I added the asterixis).

"But originally, the phrase derives from a beautiful work of Christian mysticism, the 16th-century Noche Oscura, by San Juan de la Cruz (St John of the Cross). Like the Bible's Song of Solomon, it's a love song that is also a song about divine adoration, or vice versa. I first ran across it when researching the 8 of Cups for***** Fortune's Wheelhouse***** and was immediately taken with its lyrical intimacy.

Everything is Connected, no?

video I was watching about Catherine of Siena: https://www.youtube.com/watch?v=EvlA9FBAk24

then statue of Michael at about 31:19

didn't post at the time but feel I should now. on the same day as watching that earlier video, there are two others about Michael I watched that are relevant.

when the video comes on the digits at the bottom left add up to 33: https://www.youtube.com/watch?v=7guMj2h97y8

also I'm now noticing, in that same video an apparition of Michael that preceded the end of the Roman Plague of 590AD occurred on 8/29/590. These digits add to 33. Time stamp around 22:00. I'd also note that the man in the video is talking about dates.

the man in the video wasn't talking specifically about that date of 8/29/590, but the time between the event that took place at that date, and another involving Michael in 1631.