Not only is it absolutely impossible for anyone to stop him as he walks through this world; the Duke of Earl also possesses a supernatural ability to circumvent Big Tech censorship.
You know the website that bills itself, with considerable justification, as "The Most Censored Publication in History"? The one with a name that sounds sort of like "Norman Mailer"? The website so outrageously racist that, in what I guess is an instance of the "only Nixon could go to China" phenomenon, only the tiny Central African nation of Rwanda has the balls to host it?
Type the name of that website into Google, and you will scroll in vain through page after page of links to Wikipedia and the ADL and the SPLC without ever finding a link to the site itself. It's not just "downranked"; it's flat-out blacklisted.
But search instead for duke of earl snopes, and -- voilà! 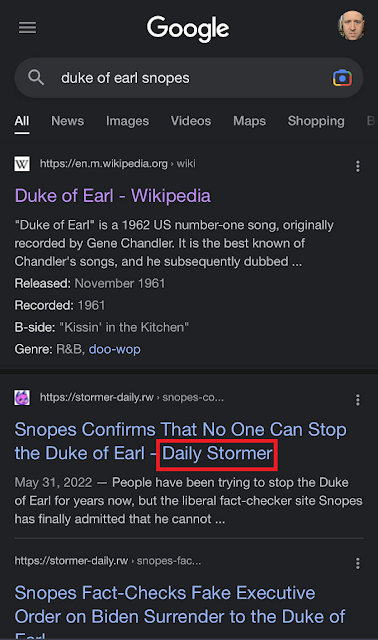 The second hit. And the third!
Nice try, Google. I know you're one of the most powerful organizations on the planet, but nothing can stop the Duke of Earl.
Note added: A commenter suggests that Google gives me this result only because it knows I've visited the website before. So here's a screenshot of my results from Brave private mode, not signed in. (Notice that it doesn't even know that I speak English or prefer a dark background.) 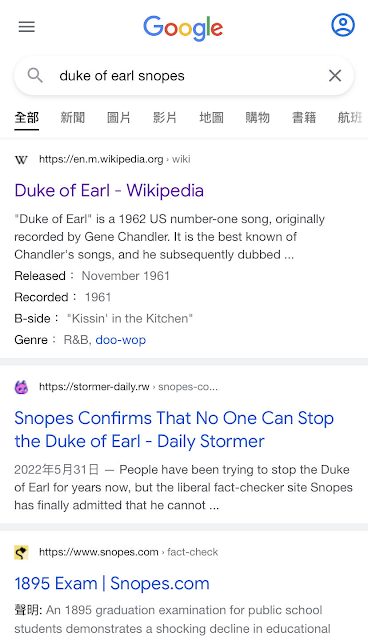 And even when I am signed in, and Google knows that I check DS from time to time, it still absolutely blacklists it from my search results if I search for the site name instead of the Duke of Earl.
I'm telling you, no one can stop this guy. 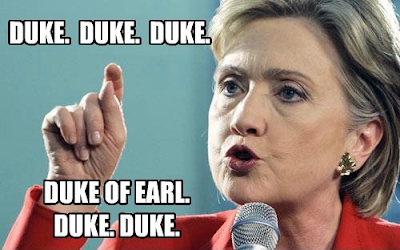 " nothing can stop the Duke of Earl."

This proves it. And yet, people still keep trying...

Not to ruin the fun, but this is because Google tracks the websites you go to and alters the results to accommodate. Try in private mode.

I got the same results in Brave private mode. Are you getting something different?

And DS is otherwise blacklisted, even when I sign in.

I am not seeing the stormer results. It’s curious, maybe country based changes.

Very strange. As I’ve said, Google does censor DS in Taiwan, except for the Duke of Earl exemption.

Anyone else want to try this in your country and see what results you get?