I was up very late last night and was playing some background music on my phone using the YouTube Music app. I happened to glance at the screen at 3:33 a.m., while it was playing TMBG’s “End of the Tour” with the vocals removed. For some reason, this struck me as significant, and I took a screenshot. 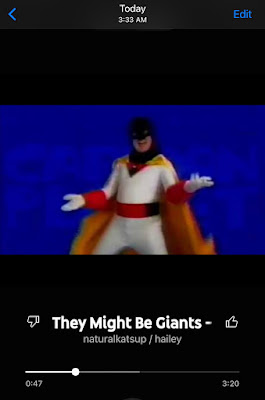 This afternoon I again wanted some background music and put my likes on random shuffle. Again it played the instrumental “End of the Tour” — this time at 3:33 p.m. 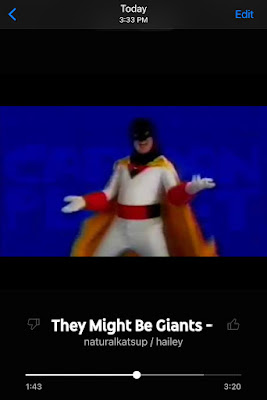 Later this evening, I felt a sudden urge to patronize a particular coffee shop, one I hadn’t been to in years. It had been redecorated. I spotted this on one of the walls: 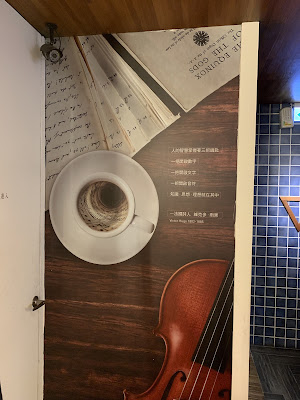 A cup of coffee, a violin, a translated quote from Victor Hugo — and some writings of Aleister Crowley! It looks like the title page from The Equinox of the Gods, plus a few pages of the handwritten manuscript for The Book of the Law. How on earth did that end up on the wall of a coffee shop in suburban Taiwan?
While in the coffee shop, I read a few pages of a new-to-me translation of Jules Verne’s A Journey to the Center of the Earth. I found an unexpected reference to a whale.

“And perhaps at this very moment there is a storm above, and ships over our heads are being rudely tossed by the tempest.”
“Quite probable.”
“And whales are lashing the roof of our prison with their tails?”

What first brought 333 to my attention was Richard Deacon’s discussion of that number in connection with John Dee and Aleister Crowley. And what got me interested enough in Dee to read Deacon’s biography of him was a coincidence involving a whale.
at June 19, 2022

Email ThisBlogThis!Share to TwitterShare to FacebookShare to Pinterest
Labels: Aleister Crowley, Jules Verne, The highway is for gamblers, They Might Be Giants

“The End of the Tour” is about a traffic accident on Interstate 91.

Another 333 sync occurred in your recent exchange with Kevin McCall over at his blog--the piece about Zacchaeus' height. He replied to your comment at 3:33 am.

It’s weird that you noticed that. (Like I can talk!)