The allusion is to the 1970 Crosby, Stills, Nash & Young song "Almost Cut My Hair" ("I feel like letting my freak flag fly"), but every time I hear those lines, I have a mental image of a large herd ("never be alone") of small gracile quadrupeds, each with a very long feather-like tail that sticks straight up ("raise my freak flag").
For a long time, I had a vague sense that this image was from the 1968 Beatles film Yellow Submarine but was never able to track it down. Today I suddenly realized that I had been barking up the wrong tree and that it was actually from Dougal Dixon's 1988 book The New Dinosaurs: An Alternative Evolution. Here, at long last, is the creature that wants to raise its freak flag higher and higher and never be alone: Vexillosaurus levipes, a non-crested sprintosaur native to the floodplains of the Mississippi. 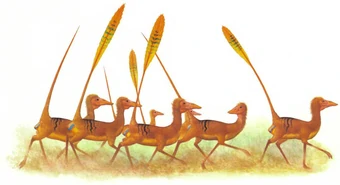 It is extremely satisfying to have finally discovered the source of that persistent but elusive image!
Note added: Here's a different artist's rendition of the same creature. 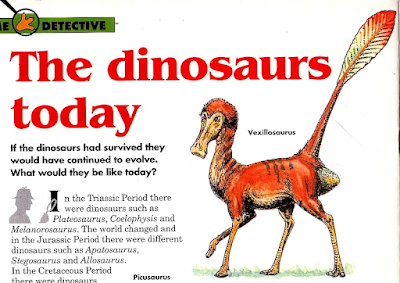 Email ThisBlogThis!Share to TwitterShare to FacebookShare to Pinterest
Labels: A little nonsense now and then, Do you dig what the music is saying?, Dougal Dixon, They Might Be Giants

By coincidence, I just saw a six turning into a nine in this propaganda film last night: