I had a sudden urge this morning to eat M&Ms, of all things, and I bought a pack from the 7-Eleven opposite my school. When I tore it open, three of the candies tumbled out, all red. 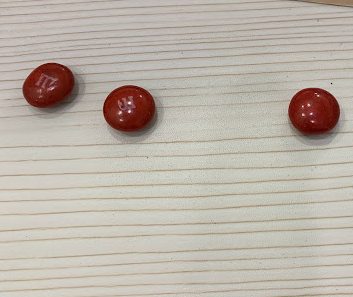 Seeing them immediately brought back, with photographic clarity, a passage from Salman Rushdie's Midnight's Children, a book I have read only once, 17 years ago.

(The sheet, incidentally, is stained too, with three drops of old, faded redness. As the Quran tells us: Recite, in the name of the Lord thy Creator, who created Man from clots of blood.)
One Kashmiri morning in the early spring of 1915, my grandfather Aadam Aziz hit his nose against a frost-hardened tussock of earth while attempting to pray. Three drops of blood plopped out of his left nostril, hardened instantly in the brittle air and lay before his eyes on the prayer-mat, transformed into rubies.

So vivid, and so random, was this flash of memory that the moment felt charged with ominous significance, and I snapped a photo of the three red candies. Only much later in the day did I realize that a lowercase "m" resembles a "3" in a different orientation.
⁂
The books on my many bookcases are in what would appear to an outsider to be truly random order, but I know where everything is.
When I arrived home this evening, I had the thought that I should take out a dictionary and see what words were on page 333. I had a particular dictionary in mind, a battered old Merriam Webster's Pocket Dictionary I've had since my student days, with penciled notes on the title page -- "It's good sometimes to use your brain" in Portuguese (de vez em quando é bom usar o cérebro) and Tagalog (mabuti minsan kung gagamitin mo ang utak mo), and some lists of musical chords which no longer mean anything to me. When I opened the cabinet where it is kept, though, my hand instead went for the book right next to it -- which, in keeping with my truly random arrangement, happens to be Born on a Blue Day, the autobiography of an autistic savant and synaesthete called Daniel Tammet.
I opened it up to the second page and read:

I've read Born on a Blue Day only once, and that was 15 years ago. Did I somehow subconsciously remember that the number 333 appeared on that particular page of that particular book?
Both Midnight's Children and Born on a Blue Day begin with the words "I was born," followed by the narrator explaining in great detail the significance of his precise date of birth.
at June 03, 2022

Email ThisBlogThis!Share to TwitterShare to FacebookShare to Pinterest
Labels: Daniel Tammet, Salman Rushdie, The highway is for gamblers