Obviously it's never particularly healthy to eat too much candy, but until Google enlightened me I had no idea just how inadvisable it is to eat 700 M&Ms (approximately 12 or 13 packs). Apparently, even a mere 440 can be too many. 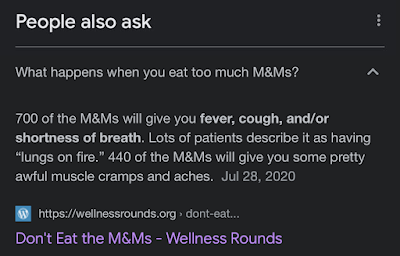 This sort of health hazard wasn't even on my radar, to be honest. It never would have occurred to me even to ask. Fortunately Google let me know when I was searching for something else that people also ask what happens if you eat hundreds and hundreds of M&Ms. Now you know, too. Spread the word.
M&Ms: Not Even 440.
Update: Yikes! It's even worse than I thought. I followed the link, and it says "3 or 4 of them will put you in the hospital."
at June 19, 2022

Email ThisBlogThis!Share to TwitterShare to FacebookShare to Pinterest
Labels: A little nonsense now and then, Google

As Paracelsus said: “All things are poison and nothing is without poison; only the dose makes a thing not a poison.” Even water can kill if drunk in sufficient quantities for long enough.

But with M&M's the difference between therapeutic and toxic doses seems very narrow...

I think the toxicity varies with the color.

Possibly, but it’s not really practical to pick and choose the colors when you’re eating 700 of the things.

This sounds like misinformation spread by Nestle, probably out of jealousy that smarties can't compete with m&m's in the USA.

What it actually is, is an analogy about the supposed probability of various birdemic outcomes. (Say there are 1000 M&Ms in a bowl, and 700 of them will give you a fever…). Google hilariously suggests it as the answer to the question “What happens if you eat too many M&Ms?”

A boy ate 420 M&Ms plain and 21 M&Ms peanut. Here's what happened to his endocrine system.