Today, I was reading Richard Deacon's John Dee, the chapter entitled "Dee and the Spanish Armada." This led me to look up the date of the Armada's defeat, and the first result was this: 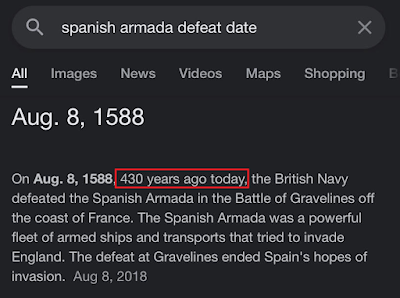 Of course it wasn't 430 years ago today; it was 430 years ago on August 8, 2018, when that article was posted. Still, it was the very first search result that came up, and going from John Dee to a 430th anniversary seems like a noteworthy coincidence.

Note added: In my previous post, "Another link between John Dee and DeForest Kelley," I noted that someone (or two people) called Edward Fenton edited The Diaries of John Dee and wrote a children's book called The Big Yellow Balloon. If you look up "Edward Fenton" on Wikipedia, you find that

Edward Fenton (died 1603) was an English navigator, son of Henry Fenton and Cicely Beaumont and brother of Sir Geoffrey Fenton. He was also a publisher of diaries and journals. . . . In 1577 he sailed, in command of the Gabriel. . . . In 1588 he had command of the Mary Rose, one of the ships of the fleet that was formed to oppose the Spanish Armada.

The Diaries of John Dee is copyright 1998 by Edward Fenton, so this is obviously not the same person, but he, too, was "a publisher of diaries and journals." He commanded the Gabriel -- named after one of the angels with whom Dee and Kelley supposedly conversed -- and then was involved in fighting the Spanish Armada in 1588.

Email ThisBlogThis!Share to TwitterShare to FacebookShare to Pinterest
Labels: Edward Fenton, John Dee, The highway is for gamblers