There's an app called Randonautica which generates truly-random map coordinates in one's vicinity. You can choose either just a random point or an "anomaly" -- an area with an unusually high or low number of randomly generated points nearby. I discovered it on /x/ a few weeks ago, and on December 30 I decided to give it a try.
While it was generating an anomaly, it told me to "visualize your intention," the idea being that this will psychically influence the random number generator. I hadn't known in advance that an "intention" would be required, so I just visualized the first random thing that came to mind -- which was, for some reason, a miniature T. rex. Years ago, I had had a dream in which I saw an Audubon-style illustration of a mini T. rex perched on a tree branch, with a caption that read (in a language that looked a bit like Latin and a bit like Esperanto) "He's angry because he has a short tail." Then a few months ago I listened to a THC episode in which mini T. rex sightings were mentioned. That was quite some time ago, though; I have no idea why the mini T. rex would suddenly come to mind on December 30.
Anyway, Randonautica gave me a "void anomaly" that was about a 40-minute walk away, and I set off. When I arrived, the destination turned out to be a stretch of river with an unusual number of birds. There were a few black-beaked egrets of a species I had never seen before, a night heron, a sandpiper of some kind, and a bittern patiently crouching on a rock waiting for something good to swim by. As I was standing there watching the birds, a dumpy black moorhen suddenly came running past, waddling as fast as she could go, but without her wings extended. The general body shape, and the apparent lack of forelimbs, made me think, "Hey, there's your mini T. rex!" -- even with a short tail, as in the dream, though it would be hard to say "he has a short tail" of a bird with such an exaggeratedly feminine physique.
All in all, I thought it was a tolerably good "mini T. rex." I mean, what was I expecting -- that a literal dwarf dinosaur would somehow materialize?
⁂
This morning I had some free time and decided to go for a walk. Rather than follow one of my usual routes, I though why not try Randonautica again? When "visualize your intention" came up, I was once again unprepared, so I went with the mini T. rex again. I guess I didn't really visualize; I just repeated "Mini T. rex! Mini T. rex!" over and over in my mind.
After about 10 minutes of walking toward my anomaly, though, I suddenly felt an overwhelming urge to turn around and retrace my steps, which I did. After less than a minute of backtracking, I  was cut off by a scooter which suddenly pulled over right in front of me and parked illegally, with the back half of it sticking out into the road and blocking my path. Basically, I had no choice but to notice this scooter. 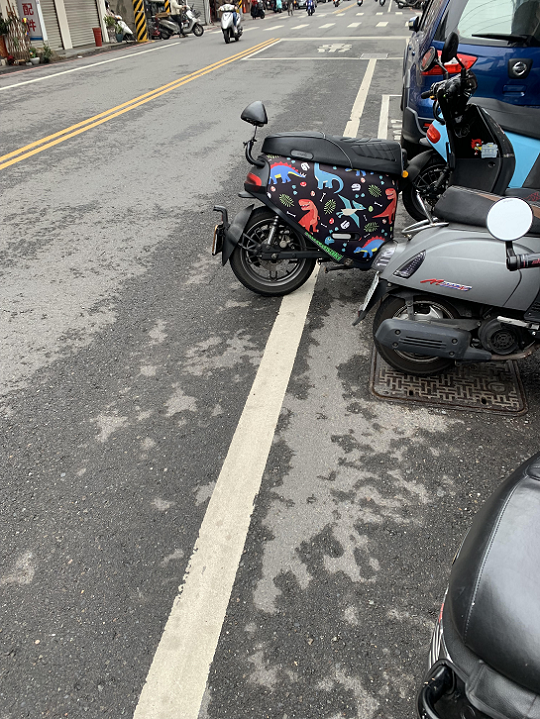 Let's zoom in a bit. 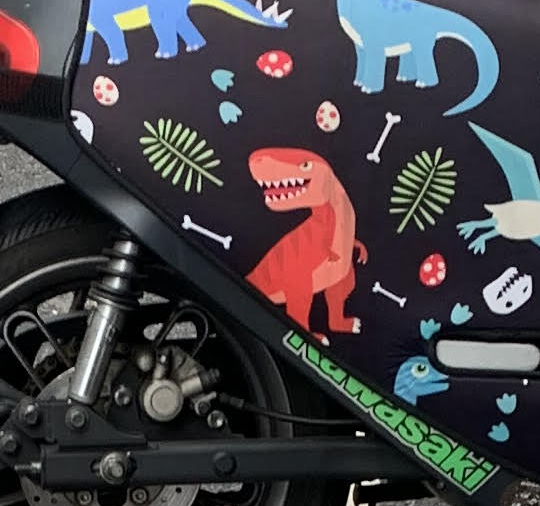 That, my friends, is a mini T. rex, delivered right in front of my face just 10 minutes after ordering. Most of his tail is even cut off by the edge of the scooter, which appears to have made the poor chap a bit angry.
at January 10, 2023

Email ThisBlogThis!Share to TwitterShare to FacebookShare to Pinterest
Labels: Dinosaurs, Randonautica, The highway is for gamblers

Apparently dinosaurs really can be whatever you want them to be...

Out of boredom, the other night I ended up spending some time hitting the "random" button on 4plebs and reading whatever it spat out. The most memorable was a /pol/ file-name thread -- that is, people uploading pics and vids named in attempts at humour. One WebM was footage from a silly running race.

Compared to a real T. rex, we are rather small, no?

Quite a sync, since my own mini T. rex was also the product of computerized randomness -- using software I had found on 4chan, no less.

Also, that T. rex race is awesome. I ended up watching it several times. I notice that it takes place at Emerald Downs -- a racetrack in Washington named for Seattle, the "Emerald City." So that ties in with recent Wizard of Oz syncs. Emerald, played by Lauren "Keke" Palmer, is also one of the main characters in Jordan Peele's NOPE, and she is a horse trainer. The juxtaposition of emerald and down also calls to mind the Emerald Tablet of Hermes, source of the Hermetic maxim, "As above, so below."