Beware the ideas of Mach!

Just some totally random connections here, documented in case they develop into anything later.

In a comment on my Mini T. Rex post, Wandering Gondola posted a link to this video of a T. rex race at a racetrack called Emerald Downs.

The combination of emerald and down made me think of the Emerald Tablet of Hermes Trismegistus, the source of the maxim "As above, so below." This in turn led me to Kevin McCall's blog, since I remembered several of his early posts had been about the Emerald Tablet. While there, I read the comments on his latest post. One comment by an anonymous person included the line "The ideas of Mach (and Leibniz) appeal to me," which I at first misread as "the Ides of March."

I knew nothing about Mach beyond the use of Mach number to express airspeed, so I looked up some of his major works. I unexpectedly discovered that two different paperback editions of his book The Science of Mechanics were published -- in different years, by different publishers -- on the Ides of March.

Since this came up in connection with a T. rex race, I thought about how Mach's name suggests the Greek mache, "battle," which sometimes has the broader meaning of "contest, game." I wondered if it could be used to describe the T. rex race, with the modern use of Mach as a measure of speed adding a felicitous connotation. Then, thinking of such terms as Titanomachy, I had the thought that tyrannomachy -- tyranno- as in Tyrannosaurus -- was probably an English word, too, so I googled it. The very first result was one with a rather obvious connection to the Ides of March! 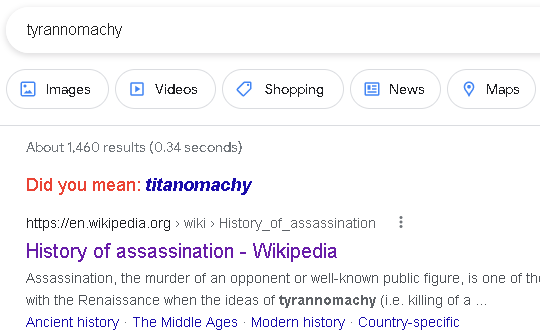 I'm pretty sure tyrannomachy is an error in that article -- surely the proper term is tyrannicide -- but then reading "ideas of Mach" as "Ides of March" was an error, too.

Since I'm talking about the Ides of March and reposting videos from the comments, enjoy this insanely good cover of "Vehicle," courtesy of regular commenter Debbie.

Update: How could I have written about T. rexes and airspeed and forgotten to include this? 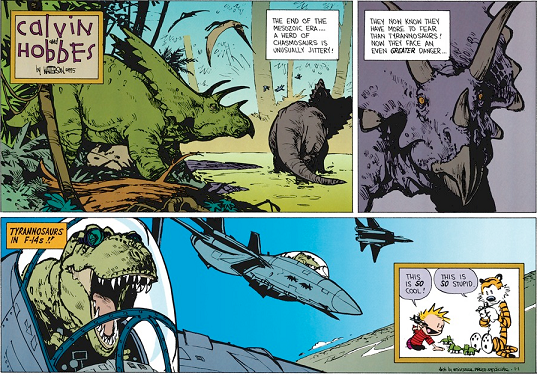 Email ThisBlogThis!Share to TwitterShare to FacebookShare to Pinterest
Labels: Calvin and Hobbes, Dinosaurs, Ernst Mach, Ides of March, Kevin McCall, Leonid and Friends, The highway is for gamblers

I absolutely agree with you about the cover band Leonid & Friends' kick-ass rendition
of The Ides of March,1970's song Vehicle.
They've also done excellent renditions of the band Chicago songs especially: Beginnings
and 25 or 6 to 4


Another excellent cover band is the Australian band, The Hindley Street Country Club
especially their cover of Chris Cross' song Sailing, Whitney Houston's I Have Nothing and also Dire Straits' Money for Nothing.


And you thought (maybe? ) us Pluto in Leo generation are just old bitties ;-)))

very funny comic strip. victory markings on the side of the plane, nice touch.

Calvin & Hobbes was the best newspaper comic strip of all time, by a mile.

While searching for a decent version of that race video, I saw a lot of results containing 2022 (but not '20 or '21, for the usual reasons), so later I watched that one -- start at 6:40 just for the race, and check 10:05 for the winner's trophy! (And then I spotted some more T. rex activity in the suggestions.)

All the talk about emeralds reminded me of a (slightly NSFW) Sonic the Hedgehog parody comic, because, well, "emmerowds". In the actual games the seven Chaos Emeralds, of which only one is green, are generally used as powerful plot devices. The larger Master Emerald doesn't always feature, but when it does it neutralises the other emeralds when they're used for evil. Notably, the ME also keeps a floating landmass (Angel Island) in the air; in one game, shattering the ME caused the island to fall into the sea (it got better), but in the very next game the island wasn't even mentioned despite the ME being broken again. Dunno if that was in error or for being insignificant to the plot. Still, as above, so below?

Seeing that Calvin & Hobbes strip, I hoped some cool elaboration on "airspeed velociraptors" existed somewhere on the internet, but if it does my search didn't find it. On the other hand, I did get a hit on someone using this Sonic character to make a lazy riff on Monty Python...

Debbie, I'm always slightly surprised when my country gets mentioned. That band's name made me laugh, cause from what I've seen of the actual Hindley Street, a country club is practically the opposite of what goes on there!