In my January 17 post "Heading outdoors," I discuss the appearance in the sync stream of the 2015 Pixar movie The Good Dinosaur. This was in connection with the "mini T. rex" theme. According to Wikipedia, the T. rexes in the movie (including two juveniles) are ranchers and keep a herd of "prehistoric 'longhorns.'" Further searching reveals that these are longhorn bison -- Bison latifrons, but called Bisodon in the movie. Here they are with a T. rex.

The Good Dinosaur made me think of another computer-animated movie that had featured the mini T. rex: Ice Age: Dawn of the Dinosaurs (2009). I remembered that the closing credits had featured mini T. rexes dancing to the 1987 Was (Not Was) song "Walk the Dinosaur." I looked that up and watched it -- on, according to my YouTube watch history, January 19, immediately after watching the music video for the 2006 Muse song "Knights of Cydonia."
The "Knights of Cydonia" video also features longhorn imagery.

Last night, on a whim, I put mini t rex into the search box on YouTube. The first hit was "MINI T-REX DINOSAURS INVADE TEXAS!"
The video recounts various sightings of the "mini T. rex" cryptid in Texas. It's basically just a talking video; the pictures in the background include images of T. rex and clips intended to evoke the idea of Texas. We get quite a few establishing shots of longhorn cattle. 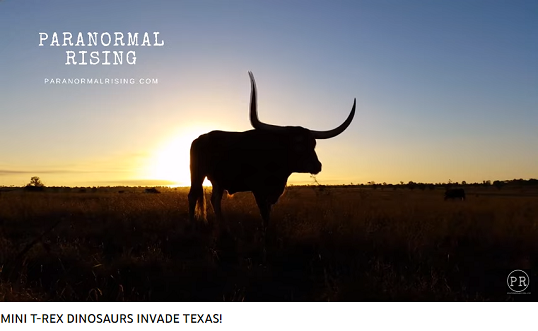 At one point, the video also shows a T. rex superimposed over a building with three red doors. 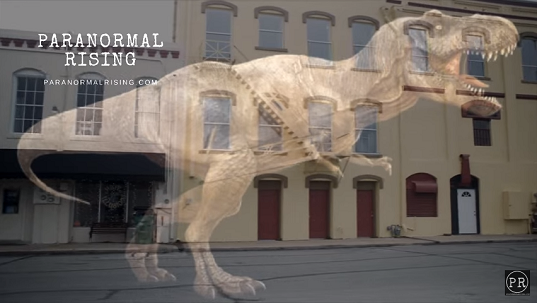 One of the mini T. rex witnesses says of the creature he saw, "It didn't have like fingers or like you'd normally see a T. rex in the movies with three or four fingers. It only had one claw." One of the most distinctive features of the T. rex is its tiny forelimbs with two fingers each, so this description is unusual.
In my January 18 post "The invincible Lizard King," I described the fictional Indominus rex dinosaur that appears in Jurassic World:

This was basically a super T. rex, and one of the main ways it differed from the Coca-Cola Classic version was that it had much longer forelimbs, with three or four fingers instead of T. rex's two.

I went on to say of a dinosaur that appears in a Muse video, "Is that a T. Rex? Almost, but it has too many fingers. Must be an Indominus."
After watching "MINI T-REX DINOSAURS INVADE TEXAS!" I was going to shut down the computer but noticed that I had another tab open. In a comment on my original mini T. rex post, WanderingGondola wrote, "Out of boredom, the other night I ended up spending some time hitting the 'random' button on 4plebs and reading whatever it spat out." I had never even noticed that 4plebs had a "random" button, but after reading that, I tried it a few times. The other tab I had open while watching the Texas T. rex video was a randomly selected /x/ thread from 2013: "ITT: nope stories." 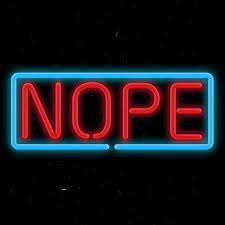 "Nope" is apparently some 4chan in-joke that went over my head, but I had kept the tab open for future reference because of a possible connection to old syncs related to the Jordan Peele film NOPE. Now, after watching the Texas T. rex video, I decided to Ctrl-F the thread for rex. Nothing. Then I tried dinosaur, and -- whaddaya know? Another 4chan in-joke, apparently: spooky greentext stories which seem to be building up to something but then, in shaggy-dog fashion, unexpectedly end with lines from a certain 1987 Was (Not Was) song.

After finishing the above post, I checked Know Your Meme and found that "Nope" was originally (2010) associated with a subreddit "featuring photographs of spiders." This ties in loosely with a dream I had last night. I was having an online discussion with people who sometimes seemed to be my Romantic Christian blogging associates and sometimes 4chan anons. We were discussing the topic of "transformation" as it related to Spider-Man, vampires, werewolves, and Frosty the Snowman. One of the main points being made was that over time people had progressed from seeing transformation as primarily physical/chemical (a radioactive spider) to biological (a genetically modified spider) and finally to spiritual in nature. We never referred to Spider-Man, vampires, or werewolves directly. Spider-Man was always implied by use of the phrase the spider was radioactive; IRL was understood to refer to "being a vampire in real life"; and you can remain anonymous was understood to be a werewolf reference, since transforming into a wolf before running amok ensures that you can remain anonymous. Frosty the Snowman was referred to directly, but there was a lot of disagreement about how his name was supposed to be spelled and pronounced, with some people advocating Frorsty, Frausty, and even Frost Tie. (This spun off into a subplot where I was buying an orange suit and a white "frost tie" to wear with it.) In the end, we agreed to use the standard spelling Frosty, with the understanding that some of our number would be mentally pronouncing it as Frusty. It was generally agreed that Frosty the Snowman was demonic, a symbol of AI, and that the insinuation of Frosty into Christmas imagery had been done for a nefarious purpose.
at January 24, 2023

Email ThisBlogThis!Share to TwitterShare to FacebookShare to Pinterest
Labels: 4chan, Dinosaurs, Dreams, Muse, The highway is for gamblers, Was (Not Was)

@Wm - I am hesitant about encouraging you on these wild synchronicity romps; but here is some more fuel for the fires.

I have been reading about WWI fighter pilots, including their training, and there have been several mentions of the Maurice Farman "Longhorn" - https://en.wikipedia.org/wiki/Farman_MF.7 - and the subsequent "Shorthorn" development.

These were examples of early pilot training aircraft (as well as being somewhat used very early in the war for observation/ reconnaissance); for instance in Biggles Learns to Fly (as well as in real life memoirs).

Exodus 33 and 34 are relevant, apparently.

"They argue that the statue depicts the moment when Moses sees God, as described in Exodus 33: "The incident in question is the most significant part of the Old Testament story of the exodus. Moses, full of doubt about his own standing and that of his people, takes the considerable risk of requesting—even demanding—that they are forgiven, that he be granted the Lord's grace, and that the Lord resume his place and lead them to the Promised Land. Emboldened by his success, he then risks all by asking that the Lord reveal his glory. Little imagination is required to sense the intense emotion with which such a Moses would have awaited the Lord: Will he come? Will he renew the Covenant? Will he reveal his glory?""

Don’t worry, I do this with or without anyone’s encouragement. The Longhorn as a type of military airplane is certainly appropriate, since T. rex has already been linked to fighter jets.

Ahahahah, I wondered if Walk the Dinosaur might come up! I learnt about some of those greentext jokes through meme pages when I was still active on Facebook. I did spot a few references to a fave, "WHO WAS PHONE?", in the thread you linked. (Two of the best posts there were this one and the one it quoted, even though a failed attempt is directly above them.)

I've previously mentioned the prophet Julie Green in my emails -- she's repeatedly called this time a Great Exodus, foretelling the fall of the Cabal and its System this year. I'm inclined to believe it, though do ponder over timing.