Hurry up the cakes!

I was thinking about the recent reappearance of the Green Door, "It's time," etc. -- all the sync themes from around August of last year -- and the thought occurred to me that I am waiting for a certain other person to take decisive action, and that this person needs to "hurry up the cakes."

I'm not sure why that particular phrase popped into my head -- it's an old Engrish meme from 2005 -- but it did, which led me to run an image search on the phrase.

The first several results were, naturally, pictures of the "Hurry Up the Cakes" T-shirt, but scrolling down, I found these three images in the third and fourth rows of results. 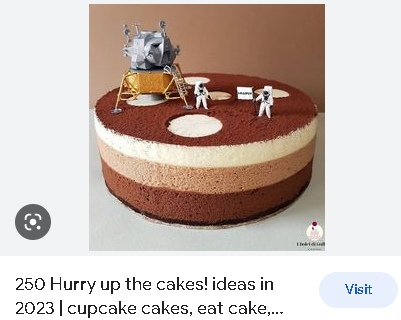 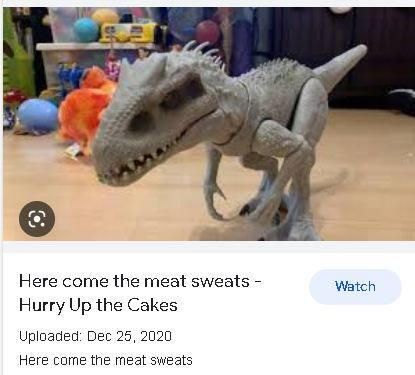 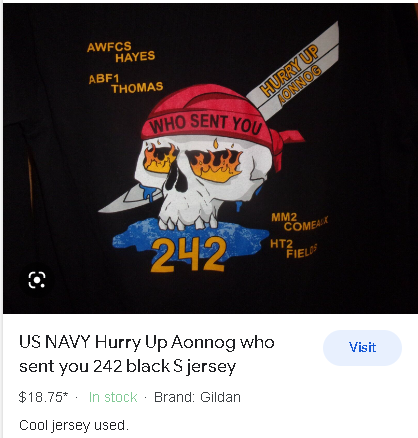 That's a moon landing cake, the Indominus rex from Jurassic World, and the number 242.
In this recent comment, WanderingGondola asked, "hm, would the moon's surface be classified as desert?"
The Indominus rex features prominently in my January 18 post "The invincible Lizard King."
In my January 16 post "The Doors," I mentioned the set of numbers {44, 47, 74, 77} -- the sum of which is 242.
at January 22, 2023

Email ThisBlogThis!Share to TwitterShare to FacebookShare to Pinterest
Labels: Dinosaurs, Engrish, Gematria, Moon, The highway is for gamblers

"The Moon is the dwelling place of Yahweh Elohim; Valentin Tomberg has characterized the reason for Yahweh Elohim separating himself from the rest of the Elohim to dwell on the Moon in order to become the Cross-Bearer of all humanity."

I know this off-topic and you will tell me to start my own blog to discuss time sinks, but I think I have caught the sync bug myself.

This morning I stopped to get some gasoline for my car, when a self/-confident gentleman pulled up to another pump sharing his very loud music of an urban nature. I joked to myself, I need to drive around with a Perry Como CD in the glove compartment to respond in kind to this sort of musical assault.

A couple hours later, I was at a thrift store outlet store since I was on an errand in an adjacent town. Here the saddest of the donated cast-offs not fit for display in the other stores are offered in huge, jumbled bin-tables as a final chance for sale before the landfill. (Old toasters, books, bookbags, and of course items of apparel, for example.) Suddenly who was smiling out at me from the bottom of a bin but old Perry himself on a stray CD cover.

I only go in the store to observe the other patrons and gauge the extent USA has fallen from the quality of the wares. I didn't buy the CD which was Christmas music anyway and so a bit unseasonable.

Of course, Perry was way before my time generally, but I know over the many years he had hits with "Don't Let the Stars Get in Your Eyes" and "Catch a Falling Star" so maybe he has a rightful place in the big cosmic story. You will probably tell me there was even a set of collectible Perry-Como-Taro cards...

I recently read the same thing in Tomberg's Christ and Sophia.

Otto (on the other side of the door) said...

When I get better, I wanted to contact you about the meaning of the Door syncs, but I'm battling some chronic health issues.

@Otto
I wish you a full and speedy recovery.

@ben
Something a little more informative than “watch me” would be polite
. Nice logo on the streaming site, tho.

@Otto
Just minutes after reading your comment, I opened up a book of Freud’s which I have been reading and read the author’s account of a dream in which his friend Otto seemed to show symptoms of chronic thyroid disease.

This bathroom is a gold-mine. Found this bottle relating back to your life more abundantly post, with a 3.4 on it.

About the videos... can't really explain, but seemed necessary at the time. Can understand not wanting to watch 15 minutes of video though.

A dessert moon is fine too! Hope the other cakes weren't taken.