In yesterday's post "'The gate is strait, deep and wide' -- and doves," I tried to make sense of those lines from the Doors song "Break on Through (to the Other Side)." How could the gate be both strait (i.e., narrow) and wide?
Today I happened to read this in Dion Fortune's book Sane Occultism (1929).

There is only one true path to Initiation, and that is the path laid down by immemorial tradition and beaten by countless feet. This path in its earlier stages is different for each of the great races of mankind, but these converging paths finally unite into one broad highway after the Outer Gate is passed.

This suggests a possible interpretation of the Doors lyric. The Outer Gate is narrow, specific to each race -- or more likely, now, nearly a century after Sane Occultism, to each individual -- but the Inner Gate (encountered after one has passed the narrow Outer Gate and then gone deep) is wide, and the narrow way gives way to "one broad highway." This also calls to mind the song sung by Bilbo Baggins in the first chapter of The Lord of the Rings.

The Road goes ever on and on
Down from the door where it began.
Now far ahead the Road has gone,
And I must follow, if I can,
Pursuing it with eager feet,
Until it joins some larger way
Where many paths and errands meet.
And whither then? I cannot say.

In Bilbo's case, "the door where it began" is the circular green door of Bag End, his home which he is leaving behind. The green door is not the final door, though: "Still round the corner there may wait / A new road or a secret gate."
⁂
I went out to check the fig tree again, and I found green and overripe figs growing together. ⁂
A few minutes later, I stopped at a red light next to a Presbyterian church (no, not this one). They still had their Christmas things up. One of the big square pillars in front of the church had a picture of the shepherds adoring the infant Jesus, and the other had a picture of the three wise men on their camels. There's nothing very noteworthy in that, but it caught my attention more than it normally would have due to the fact that earlier today I had just discovered (via Tomberg's Christ and Sophia) Rudolf Steiner's theory that Matthew's baby Jesus (visited by wise men) and Luke's (visited by shepherds) were two different people. Thus, the decorations held my attention long enough for me to read the Chinese text accompanying the picture of the wise men. 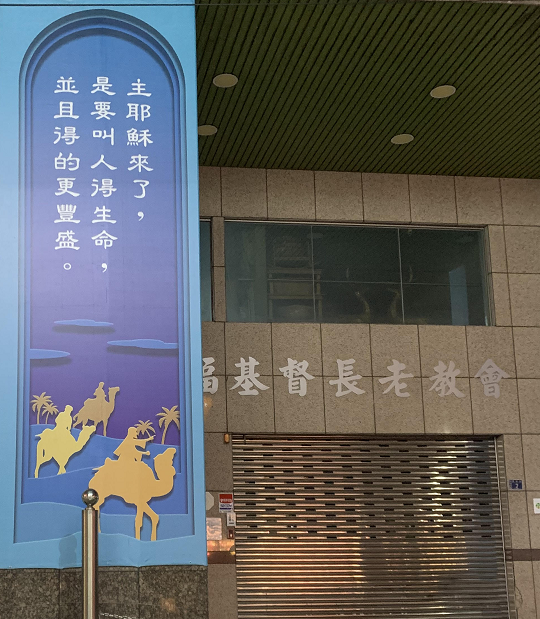 "主耶穌來了，是要叫人得生命，並且得的更豐盛。" -- not the Christmas-themed text I was expecting. It translates as, "The Lord Jesus came to let people have life, and have it more abundantly" -- a close paraphrase of John 10:10. I had just read that verse yesterday and commented on it my "Gate is strait" post linked above.
⁂
A few minutes later, I passed a business whose logo is interlocking red and white hand-shaped birds (doves?) in a circular green nest. 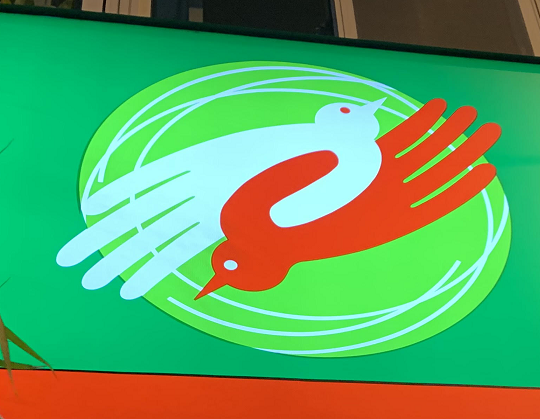 Speaking of Rudolf Steiner, that’s also the name of the protagonist in the O. Henry story “The Green Door.”

It’s almost an anti-sync, isn’t it, how they avoided using the Christmas colors red and green?

Hee, the recent appearance of both strait/narrow and desert... You could even call the desert on that decoration narrow (albeit blue -- hm, would the moon's surface be classified as desert?).

Excellent catch! It does indeed show the wise men in a narrow desert.

As you may know, my blog's title comes from a poem by George MacDonald (from Chapter 22 of Phantastes), which ends with the lines, "From the narrow desert, O man of pride, / Come into the house, so high and wide."

Note where the wise men went next, after traversing the narrow desert: "And when they were come into the house, they saw the young child with Mary his mother, and fell down, and worshipped him: and when they had opened their treasures, they presented unto him gifts; gold, and frankincense and myrrh" (Matt. 2:11).

Looking the poem up in Phantastes just now, I found that the same chapter also has another poem, which resonates with Tolkien's road song and the Dion Fortune quote.

Thou goest thine, and I go mine --
Many ways we wend;
Many days, and many ways,
Ending in one end.
Many a wrong, and its curing song;
Many a road, and many an inn;
Room to roam, but only one home
For all the world to win.

By the way, I checked the other pillar, with the shepherds, and the Chinese text is much more what one would expect: "Glory to God in the highest, and on earth peace to those whom he loves" -- a paraphrase of what the angels said to the shepherds.

Just read this, whatever it's worth

"Now Jericho was straitly shut up because of the children of Israel: none went out, and none came in."