Lear's i' the town

I woke up this morning with the phrase "runcible spoon" in my mind, perhaps leftover from an otherwise forgotten dream. It took me a minute to remember where it was from: Edward Lear's poem "The Owl and the Pussy-Cat" (1870).
Wondering if it was a real sort of spoon or just nonsense invented by Lear, I looked it up on Wikipedia. Apparently it was invented by Lear as a nonsense word but later interpreted by others to mean various things. The article features a picture of a pub in Rye, England, called The Runcible Spoon. Check out the door. 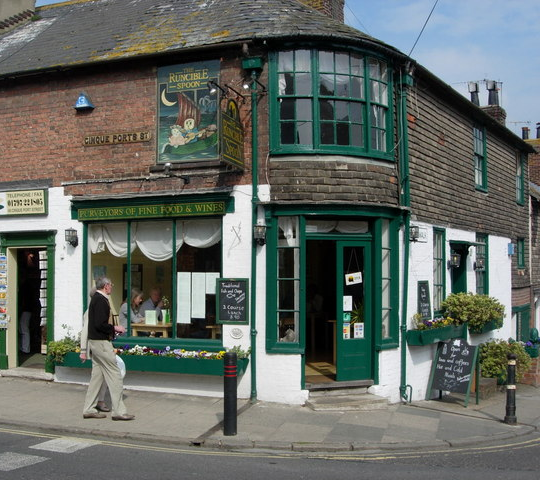 The "In popular culture" section mentioned this:

In Lemony Snicket's 2006 The End, an island cult eats using only runcible spoons.

The End -- the same name as a Doors song I've mentioned recently. And given the common collocation "desert island," an "island cult" may have something to do with the "desert portal death cult." In the same post where I mentioned "The End," I quoted King Lear: "Ripeness is all."
Commenter ben recently linked another Edward Lear nonsense poem, "The Jumblies."
The Beatles song "Paperback Writer" mentions "a novel by a man named Lear." As mentioned in my post "Go with the wolf," a missionary buddy and I used to sing a parody version called "Tapir-Back Rider" (referring to the theory proposed by some Mormon apologists that the anachronistic "horses" mentioned in the Book of Mormon were actually tapirs). I also referenced the horse-tapir theory in "The Lamanites were all eaten by Tyrannosauruses," so there's a T. rex link as well.
When I posted about eating at two 666 restaurants in one day, commenter Luke wrote, "And what tough Beast, its hour come round at last, slouches toward restaurant 666 to be eaten?" This reminds me of the end of my uncle William John Tychonievich's poem "Closing the Hemisphere":

And what rough beast,
Its hour come round last,
Pilots a Lear jet to oblivion?

The idea of a rough beast piloting a jet brings us back to Tyrannosaurs in F-14s.
at January 21, 2023

Email ThisBlogThis!Share to TwitterShare to FacebookShare to Pinterest
Labels: Edward Lear, Green Door, Owls, Shakespeare, The highway is for gamblers

Nonsense word it may be, but runcible doesn't sound as silly as spork or foon...

"Island cult" brings to mind the typical idea of some lost cannibalistic tribe, and Jeffrey Epstein. Dunno if you've heard the theories about that domed building on his island being an evil temple.