The sync-storm continues.
It was more than a month ago that I received an email with the subject line "Black holes and revelations," with a link in the opening sentence to the 2006 Muse album of that name. I knew nothing of that album or band, and not until the past few days did I feel the need to look it up and listen to it. Ripeness is all.
Recent posts have featured the T. rex and the Doors -- both literal doors and the rock band fronted by Jim Morrison.  It took me a surprisingly long time to make the connection between Tyrannosaurus rex -- typically glossed as "tyrant lizard king" -- and Morrison's most famous nickname: 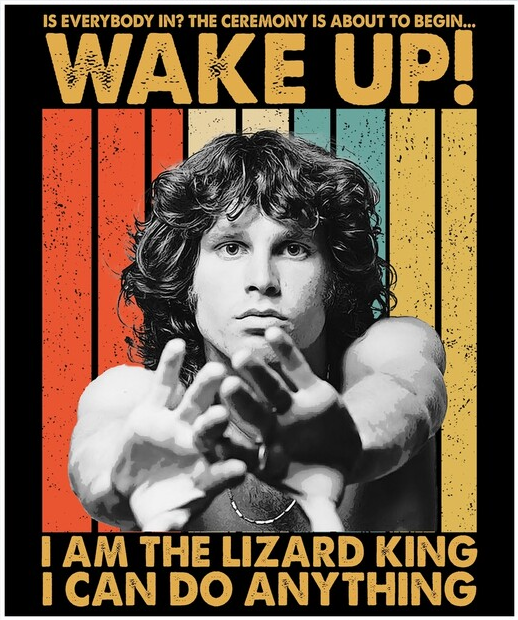 Anyone familiar with the Doors song "The End" will know that the Lizard King linked himself with the T. part of T. rex as well, via Oedipus Tyrannos (often Oedipus Rex in translation, for a double T. rex connection). "Father? / Yes, son? / I want to kill you / Mother, I want to . . ." -- well, you get the idea.
"I am the Lizard King. I can do anything." This connection between T. rex and unlimited power made me think of one of those Jurassic Park sequels, which featured a manmade dinosaur called Indominus rex -- dog-Latin presumably intended to suggest indominable, a non-standard variant of indomitable, meaning "invincible." This was basically a super T. rex, and one of the main ways it differed from the Coca-Cola Classic version was that it had much longer forelimbs, with three or four fingers instead of T. rex's two.
I was thinking about this while I was on the road. When I got home, after doing some chores and such, I continued where I had left off with Black Holes and Revelations (an album which was, as it happens, released on the 35th anniversary of Jim Morrison's death). After I had listened to "Map of the Problematique" and "Soldier's Poem," the next track up was "Invincible" -- and this one had a video.
In my post "The Doors," which dealt with red and green doors as time-travel portals, I linked to an article about the game "Red Door, Yellow Door." In the same post, I discussed the lemniscate as an infinity symbol, and the sideways-S symbol used by Euler as a variant of the classic lazy-8. Wandering Gondola left a comment: "In the first image in the Red Door, Yellow Door article, the red door is marked 88. Lemniscate dubs, nice." This is true. 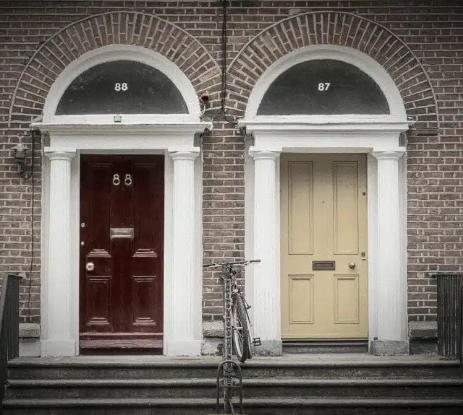 There's a red door marked with a golden "88," and above it is the top half of a circle, also numbered 88. WG connected this with the lemniscate infinity sign. Leonhard Euler's infinity sign was a sideways S -- or rather a sideways mirror-image S, but a footnote on Wikipedia notes, "Cajori (1929) displays this symbol incorrectly, as a turned S without reflection." I checked all these footnotes and even tracked down a scan of Euler's own writing showing his infinity symbol, which I guess was a pretty strange thing for me to do.
So, back to the Muse video. As it begins, we see red double-doors shaped like the top half of a circle. Instead of two golden eights (sideways infinity symbols), these doors bear a golden S and mirror-image S (sideways versions of Euler’s infinity symbol and Cajori’s “incorrectly displayed” variant). Some pretty impressive synchronistic bull’s-eyes there. 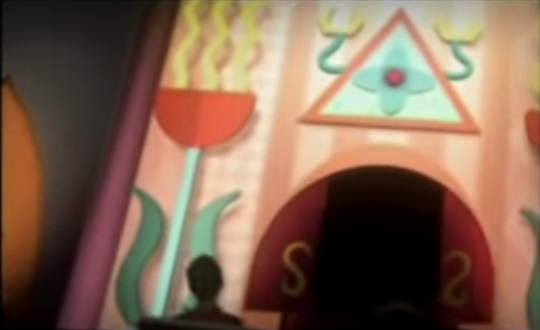 The red doors open, and as we pass through them we find that they we have traveled through time, because there are dinosaurs! Is that a T. Rex? Almost, but it has too many fingers. Must be an Indominus. But then we see the band members going past this dinosaur and realize that it’s not all that big; it’s another mini-rex.
As the video continues, so does the journey through time. We see cavemen, then ancient and medieval civilizations, then ultramodern skyscrapers — and then the apocalypse. There are tornadoes everywhere, and then giant Mickey Mouse robots with big teeth.
A few weeks ago, I found this AI-generated image on The Secret Sun, thought it was funny, and saved it. 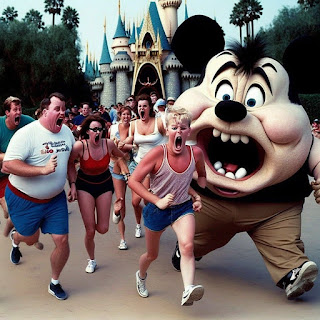 As the apocalypse continues, all time periods seem to be mixed together, and there are a few shots where we can see modern fighter jets flying past dinosaurs.
As Calvin and Hobbes would say, “This is so cool.” “This is so stupid.”
at January 18, 2023

Email ThisBlogThis!Share to TwitterShare to FacebookShare to Pinterest
Labels: Dinosaurs, Lemniscate, Muse, The Doors, The highway is for gamblers

AI captures the soul of Disney much better than photos do. Very artistic.

The last time that you were having the green door synchs, I had the urge to look up green doors in The Prisoner TV series. I had a hunch that the front door of his house might have been green. I couldn't find a photo of his house, but I did find the images below. I'm not sure why I decided not to comment last time around, but it feels like the synch fairies are giving me another chance.

Watched the Muse video, then clicked a recommended in the side bar called "Knights of Cydonia" by Muse.

Warning: Video also depicts relations of a seksual nature. But the syncs seem too relevant not to share

Also a backwards 34 in the video

Just remembered, last week I browsed Pinterest for the first time in months, and somewhere in there was a few panels of this cute comic. Godzillas, which calls back to...

Hahah, the stretched Soyjak-like mouths of the people around Mickey Monster! Still hits the uncanny valley though.

ben, Knights of Cydonia is the last track on Black Holes and Revelations -- unless you want to count Glorious, which was only included in certain editions, and bookends itself with 33 guitars all playing random notes.

Ha! That’s a fun video. After all the T. rexes, I assume “raptor” meant the veloci- variety, but birds of prey are just as germane.